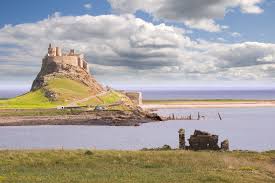 The historical Holy Island, famous for its connection with early Christianity, has for the first time another connection – a link to a water supply on the mainland.

Holy Island is separated from busy civilisation by salt marshes and sand flats that are only open for passage when the tide is low. It is the place to go if you need to find inner peace. The Celtic Christians sought the solitude and seclusion of the sacred island for their prayers. Today, the spiritual heritage of the island continues to attract tourists who retreat to the island. Its population can therefore double during the summer months.

The inhabitants on this historical island located some five kilometres off Scotland’s West coast, are used to their independence. They have their own heritage, spiritual history and a detached view for the hectic pace of modern civilization.

They also used to have their own water supply. However, in the beginning of the 1990’s, the central borehole on the island began to show sign of fatigue.

“We were concerned that if we didn’t do something with the increasing ingress of salt from the borehole into the water we might face some serious security and water quality problems,” says Alan Fittes, Rehabilitation Manager at Northumbrian Water.

Faced with the disastrous prospect of salty tap water, Northumbrian Water undertook the process of linking Holy Island to the mainland for the first time. More than ten kilometres of plastic pipeline were ploughed into the soft marshland, ensuring a constant water supply from two separate water reservoirs on the mainland. The islanders were thus provided with a guarantee of salt-free drinking water.

“Plastic pipes were the ideal solution to meet our specific challenges,” Alan Fittes explains. “The working conditions of the installation were very challenging as we were only able to lay the pipes during low tide. In order to minimise the risk of future leakages, we needed pipes with a minimal number of joints. By choosing plastic pipes we were able to operate with hundred metre long flexible coils.”

The ploughing installation process was quite a remarkable accomplishment. The ploughing machine consisted of a long hollow box through which continuous lengths of pipe passes to be buried and backfilled as the plough moves forward. Great care was taken throughout the installation process to minimise disruption to the natural environment. Holy Island is a home to many migrant birds and waterfowl.

Today, Holy Island may have lost some of its independence by letting the water flow from the mainland to the island through plastic pipes. And some of the spiritual ancestors may awaken to the sight of this unprecedented modernisation. However, a reliable and high quality water supply is now part of the daily life for the islanders. Alan Fittes knows that so far there have been no complaints – at least not from the living! Holy Island and its people have simply regained their inner peace…