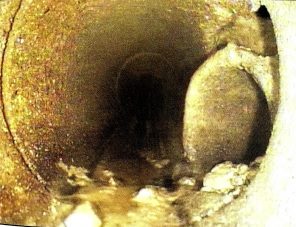 A recent independent study quantified the incidence of defects in 1800 km of sewer pipes. Here, we investigate key types of defects and how each might impact on performance. The results show that flexible pipes are more tolerant to defects…

INTRUDING CONNECTION
Intruding connections are made when pipes are introduced to the system, such as when a new housing development needs to be added to the main sewer. The research indicates that the incidence of defects arising from these connections is significantly higher in rigid systems.

DEFECTIVE CONNECTION
The connection between the two pipes can be compromised, either during installation due to poor workmanship, or by damage during service – such as shifts in the soil surround. In both flexible and rigid gravity sewer systems, the connection between pipes is typically made with sockets and seal rings. Generally speaking, it is easier to create a robust and tight seal with flexible systems because of their smoother surfaces – and, as plastic pipes are generally longer in length than other materials, fewer connections are required along the pipeline.

The research bears this out, showing that with rigid pipes, almost 18% of the inspected sections contained this type of defect, compared with just 0.4% for plastic. 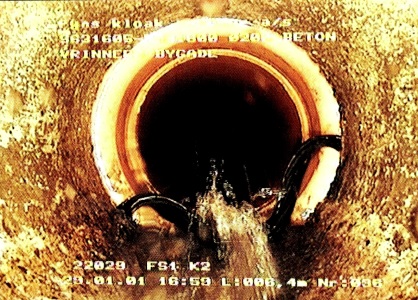 FISSURE / BREAK
A fissure is defined in the visual inspection coding system for drains and sewers systems as an intact pipe with visible cracks (longitudinal, circumferential or a mixture of both) in the pipe wall. When the crack becomes larger and the inner surfaces of the crack are visible, it is classified as a fracture or break. Both can weaken the pipe section, whilst complete fracture can lead to loss of structural integrity. Because rigid pipes tend to be shorter than flexible pipes (with more connections) and are unable to accommodate earth movement so easily, they show a higher frequency of fissures and breaks – 14.6 incidences per kilometre compared with 2.0 incidences for flexible. 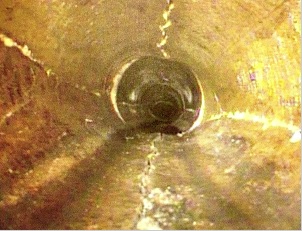 OBSTACLES
Whilst debris in a drain or sewer includes silt, grease and other materials (including construction waste), ‘obstacles’ refer to larger objects which impede the flow e.g. tree roots, large construction waste etc. These can significantly reduce the flow capacity of the sewer while tree roots growing through defects also cause exfiltration and infiltration. The research demonstrates that blockage is considerably lower for plastic (1.4 per kilometre) compared with 7.1 for rigid pipes. The difference is even more significant in terms of the percentage of inspected sections which contain defects (2.7% for flexible, 11.0% for rigid). The explanation is simple: with their smooth inner walls and superior hydraulic performance, flexible pipe systems offer less friction and therefore fewer blockages. 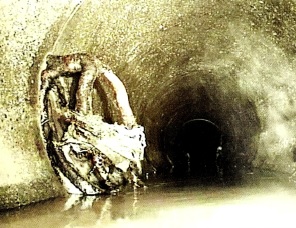 SURFACE DAMAGE
In addition to chips or other material breaks, changes in surface roughness occurs from encrustation and mineral deposit on the pipe walls or joints, or corrosion from chemical attack. The properties of flexible pipes ensure far higher protection against both encrustation and corrosion than rigid pipes – a fact highlighted by the research. Put simply, flexible pipes recorded a zero figure, while rigid pipes did not. 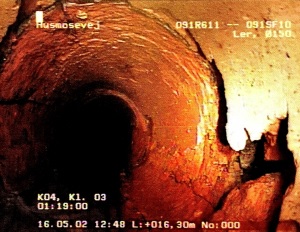 DISPLACED JOINT
Alternatively known as an ‘offset’ joint, this specifically refers to situations where a pipe’s spigot is incorrectly aligned with the socket of the adjacent pipe. Where the displacement is less than the thickness of the pipe wall, it is graded as ‘medium’ – and ‘large’ when the displacement is greater than the pipe wall thickness. For rigid pipes, the frequency of incidents (7.1 per kilometre) and the percentage of inspected sections containing defects (10.6%) were significantly higher than for flexible material – 1.2% and 2.3% respectively. This is almost certainly a result of both more joints per installation and the inability of rigid systems to accommodate soil movement. 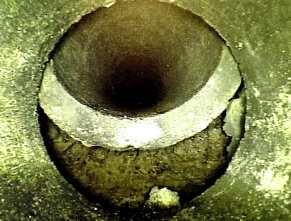 DEFORMATION
Deformation describes the extent to which a pipe’s shape – or cross-sectional profile – has changed. Rigid systems do not deform and so this is a feature specific to flexible pipes. However, if they are specified and installed correctly, flexible pipes will exhibit little or no deformation, and that provided it is within the normal range of deformation (< 5%), there will be no loss of structural integrity. 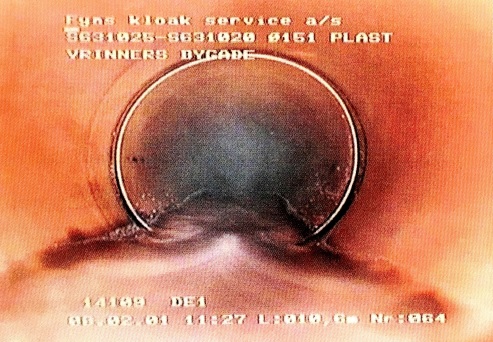 INFILTRATION
Infiltration refers to any situation where ground water is leaking into the pipe. Infiltration can occur at any defect and is classified by the rate of water flow. ‘Seeper’ is used to describe either slow flowing water or evidence of previous infiltration, such as stains. ‘Dripper’ refers to evidence of slow but steady infiltration, while ‘gusher’ describes heavier flows. In both measures used in the research – percentage of inspected sections and frequency of defects – flexible pipes recorded a lower score (1.1 incidents per kilometre, compared with 4.7 for rigid, and 2.7% compared with 8.3%). 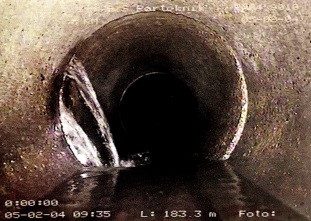 In virtually all of the scenarios studied, the incidence of defects in flexible pipe materials is less than rigid pipes. As well as minimising the impact on the environment and sewer operations by reducing exfiltration and infiltration, flexible pipes can also offer the least disruptive solution to repair of defective pipes through ‘no-dig’ techniques.

The conclusion is clear: the most effective solution to preventing defects in sewer pipe systems lies in flexible materials, in terms of durability, performance and ease of repair and rehabilitation.

european study of the performance of various pipe systems_benefits (740.62 KB)